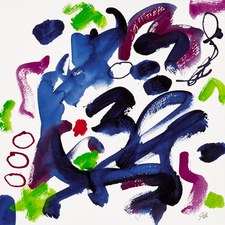 William Parker:  Meditation/Resurrection.  2 CD set with Lois' work on the front and back of the album.  AUM Fidelity:  Brooklyn, NY

WGBH Art Auction at auction.wgbh.org/  One work by Lois selected by juror for the online auction and for the WGBH Art Walk.  The work shown at the Martha Richardson Gallery at 38 Newbury Street in Boston from July 22 - 27.


Selected Past Solo and Featured Exhibitions

HGTV Dream Home 2011, Stowe, VT.  Two paintings by Lois Eby in the Master    Bedroom.   To view a self-guided tour of the house go to:   http://www.hgtv.com/dream-home/index.html.

2003
Rhythm, Color, and Harmony: A Juried Art Exhibition. Presented by IAM (Incorporation of Artists on the Move) in connection with the JVC Jazz Festival. At three galleries in New York City.

1996
Healing Art: From the Inside Out, VWCA juried show, Trinity College, Burlington, VT


Work for Print, DVD and Audio

On Being Native.   Release of an updated DVD which includes Lois’ ink drawings for David Budbill’s Judevine poems, an original score for string quartet by William Parker and poems written and read by David Budbill.   2012-2013.

America Zen: A Gathering of Poets. Ed. with an Introduction by Larry Smith and Ray McNiece. "Enso" on Title Page and Back Cover. Huron, Ohio: Bottom Dog Press, 2004.

From Down to the Village, by David Budbill, l98l, The Ark, 35 Highland Avenue, Cambridge, MA, 02139. For more go to: http://www.davidbudbill.com/vill.html